Nothing you have ever imagined in your wildest imaginings or your most sophisticated of pondering will ever prepare you for the very real culinary experience of eating at José Andrés’s “The Bazaar”. The Bazaar is a Spanish Tapas (both traditional and molecular) restaurant based in both Beverly Hills, California; Miami, Florida and opening soon in Las Vegas.

Molecular is by now, very familiar to most but to me it was a new experience. We ate at the Beverly Hills location and I must admit, being out-of-towners, the drive along the looping, wandering traffic circles and winding roads around the restaurant did much to prepare us for the disorienting, unfamiliar shocking gastronomic experience that we had. I wonder if he moonlights as a civil engineer as well? 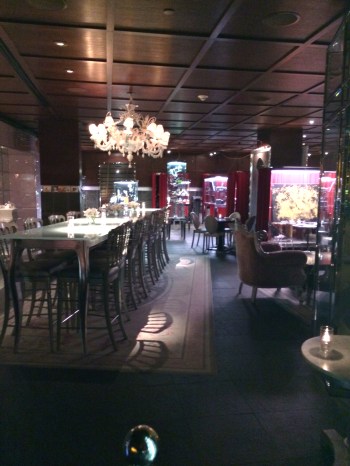 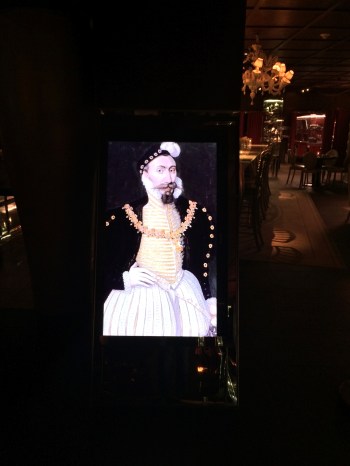 The space, designed by Philippe Starck,  is sexy and mysterious with lots of discombobulating interior features and rooms entering rooms much like the Russian Matryoshka dolls. But unlike the Matryoshka dolls, symmetry and coherence is not part of the design, at least not at first glance. Dining rooms are cut at bizarre angles, each with its own lighting philosophy and design sensibility. The foyer is dressed with vintage memorabilia, whilst others are designed like dance floors of the true era of disco.

We were seated at a line of tables which extended from the foyer in a single, white, diagonal line, flanking other more expansive dining areas shielded behind pillars and thick velvet curtains, some reflected by the ever present mirrors scattered around the place. Aimed at the “slightly” narcissistic, the wildly imaginative and the seasoned adventurer, The Bazaar places itself well within the realm of the three.  The crowd resembled the space. Families, couples, large bodies of business people, some folk looked like circus entourage, the people were as fascinating as the food.

We ordered 7 or 8 dishes but did photograph them all because they were not all distinctive but those that were, made me cry. I kid you not.

Here are some of the dishes we tried: 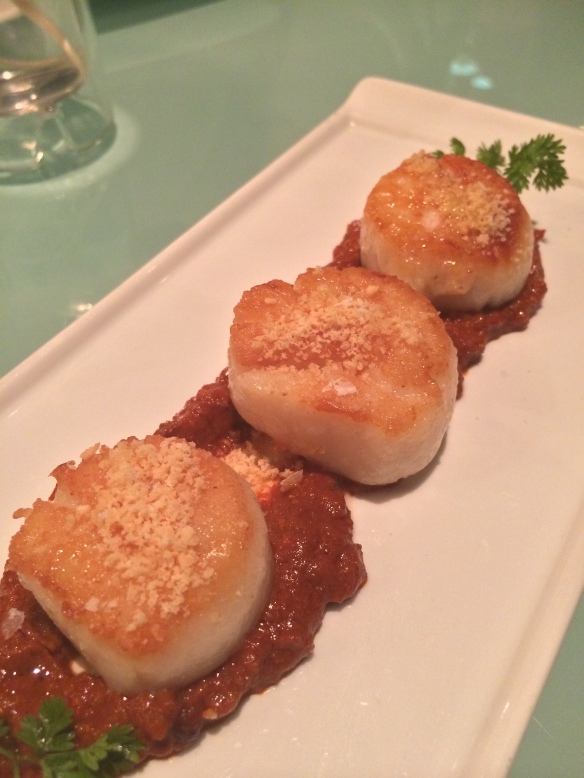 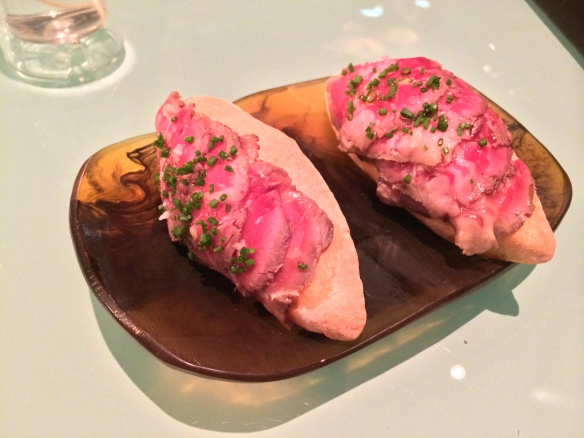 Modernist: Listed on the menu under the heading “A Few Sandwiches” the Philly Cheese Steak is probably the one menu item they are serving the largest quantity of each day and indeed it is one of the reasons we even came.

But…that did not make me cry. The olives did.

The traditionally-prepared olives on the right, placed next to the molecular on the silver spoons on the left, celebrate the journey the olives have made.

If you’ve ever eaten an oyster so raw and delectably alive that you squirmed around in your seat, then the experience of eating molecular olives will draw the same reaction out of you. Made by juicing olives, mixing with xantham, resting the mass, then dropping into a sodium alginate bath the mixture forms into perfect spheres of olives. When placed in the mouth, they pop at the slightest coercion and explode a briny, salty, aromatic, acidic liquid in all parts of your mouth, exciting all the taste buds and causing mild concern at neighbouring tables as you gasp, giggle and cry.

The beef cheek was pleasant.

I am an absolute snob when it comes to dessert and always find baked goods to be inferior to raw ones. We tried this because my final presentation at school involved creating a red velvet raw ice-cream so any opportunity to test was a good one. I am sure that it is a marvelous cake to people who have never tried raw desserts.

I was still crying over the olives so barely ate this.

The price point on the menu is above average but not high enough to warrant you selling your house to eat there. If you’re in California and have been hmming and aaahing about going there for a while, I highly recommend it.

In my next blog posts, look forward to “Red Medicine” and “Sadtha”.