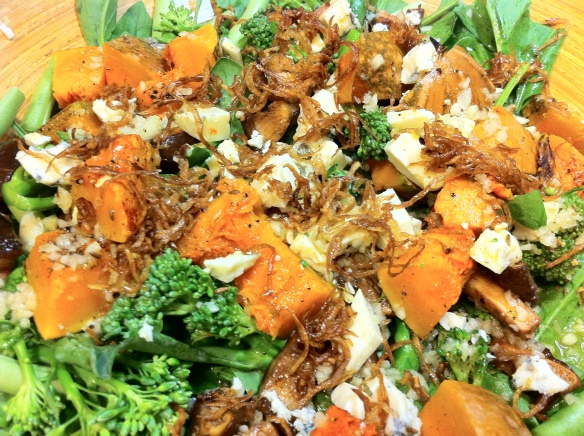 A few years ago, I read that book,Skinny Chicks Don’t Eat Salads and to be honest, I found it completely unmemorable. Also, I usually find salads to be the last thing I would order off a menu unless I was subconsciously trying to deal with the guilt of having previously consumed something unhealthy. I think this is called “purgatory”.  Don’t look away. I know you do it, too.

Now I try to find pleasure out of salads and include one in every day of the week. Even if I don’t always get there, it’s habit I’m working on. I think my problem with salads is that I usually feel even more deprived AFTER eating one than before, like I’m missing out on a real meal. I think eating like this fosters more anxiety about food and drives us, ironically more in the direction of unhealthy food. The body needs to feel satisfied and grounded and I don’t feel that way after munching on some sparse leaves and seeds from a bowl.

The salad above has everything I need to feel like I’ve eaten a meal – the bulkiness of roasted pumpkin, the heartiness of tenderstem broccoli (it’s really tiring chewing on those stalks), the earthy smokiness and spiciness of raw chipotle-marinated mushrooms (can one ever eat any dish without at least a little heat???), the sweet, rich delicacy of raw caramelized onion and the decadence of good, creamy gorgonzola. Throw in my new, favourite salad dressing of chunky garlic and cumin and you won’t even have space for dessert. Gorgeousness. Really.

You may have noticed that the last three salads have had gorgonzola in them. In a way, part of the salad recipes came about because we received a block of gorgonzola as a gift from family in the US. It felt really special because it was just this single block of cheese. It wasn’t one gift among many as is usually the case so the sense of wowness around it, made me think twice as hard about what to do with it. We are a dairy-free household but we are not anally-retentive about it. We still maintain our playfulness and humour about food. So if I’m going to feed us dairy-based cheese, I may as well make sure it is complemented by a lot of fresh vegetables.

Ok, here’s the recipe as far as I can remember and I’m not sure about measurements:

Prep: use your mushroom of choice, slice them up and marinate with olive oil, salt and chipotle.

1. Hack a pumpkin open, scoop out the innards and rub generous amounts of olive oil inside the cavity and the skin. Sprinkle with your favourite salt and black pepper. Roast it.

2. Rinse and shave your tenderstem broccoli – just the stems so they are easier to chew and digest. Cruciferous veggies gets lots of bugs stuck in them so make a bath of warm, salty water and leave em in there for about 10 – 15 minutes. Don’t pour the water out with the veggies still in the bowl. Lift the veggies away from the water. Then rinse. All the residue will remain at the bottom of the bowl. Wrap in a tea towel and press gently. or swing the tea towel around in the air and the water will separate really quickly. Do make sure you have secured either end with an elastic band or something.

Place the tenderstems in a salad bowl along with cleaned spinach leaves. Pour half of the salad dressing over the leaves and broccoli and gently mix. Over mixing will wilt the leaves and leave them lacklustre.

This dressing was inspired by one of my many searches which revealed Cuban chef, Marciel E.Presilla

By now the roasted pumpkin should be cooked and cooled, cut into cubes and gently move them around the bowl of salad dressing then pick them out and place them in the salad bowl with broccoli and spinach. I don’t like touching the pumpkin too much or they will not maintain their shape.

Next add your gorgonzola and the remaining dressing. Finally, top with raw caramelized onion.

Finely julienne a medium-sized purple onion. Mix with about two tablespoons of honey/ maple syrup or whatever sweetener you choose, add two tablespoons of olive oil then dehydrate for a few hours until they get softer. You can store these in the freezer and just warm in the dehydrator whenever you need the. Alternatively , just bake them in the oven.